Our highly anticipated trip to Chicago turned out to be a really great day filled with memories. We did it in a different way than in the past, we took the train in for half of the journey.  The closest Metra train station to Madison is in Harvard, IL  so we went there.  It is 1  1/2 hours away.

The depot opens about 1/2 hour before the train leaves, you can get coffee and pastries too. This is the map of all of the Metra lines going into Chicago. 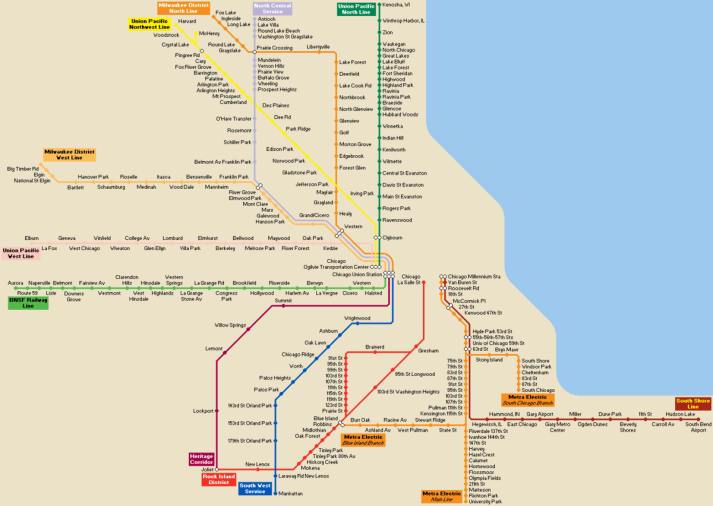 I have not ridden Metra since the 1980’s and Al never had. In Harvard, you take the Yellow line.  We took the 5:47 AM train, the first one on a weekday morning.  If you don’t get your tickets online, be prepared to pay cash for your fare on the train, the Conductor can make change. It costs $2 to park for the day in their lot, there is a kiosk to pay for that across from the depot.

We waited for the train, the setting moon lighting the scene.

On the train by 5:35 AM.  The inside of the train car, clean and comfortable.

We were entering the city around 7 AM and the Willis Tower came into view through the train car window. We were getting excited!

We arrived at the Ogilvie Transportation Center on time, what a big station! It was visible from the Willis Tower, the large black building on the left.

This was the first time we had ever seen a bustling weekday morning in Chicago. People burst out of the trains, hurrying to their jobs. One thing I noticed, the most common color of people’s coats was black.  We lingered in the station a few minutes to buy our return tickets, we had to be back on the train by 3:30 which departs at 3:45.

This building is mostly glass and beautiful for a train station. It was built in 1984, designed by Helmut Jahn.  There is also shopping and restaurants here, especially great if you are on a layover to catch a connecting train or bus.  Almost blending in high in the glass atrium is an Elgin Clock keeping the passengers on time.

A  side view of the clock on the left side.

It was time to make our way toward the exit, we were on a tight schedule! Here is a view of the crowd heading to the ground level on Madison St. 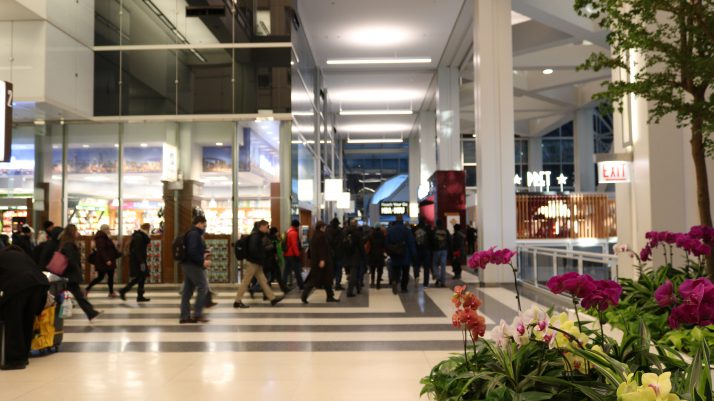 And here we are outside!

This building is HUGE, but not as big as where we were headed next, the Willis Tower a couple of blocks away. Across the street is Union Station.  It was funny seeing 5 cabs scurrying like mice after the light turned green.

We crossed the bridge and turned right, walking alongside the Chicago River. This plaque was on the bridge. 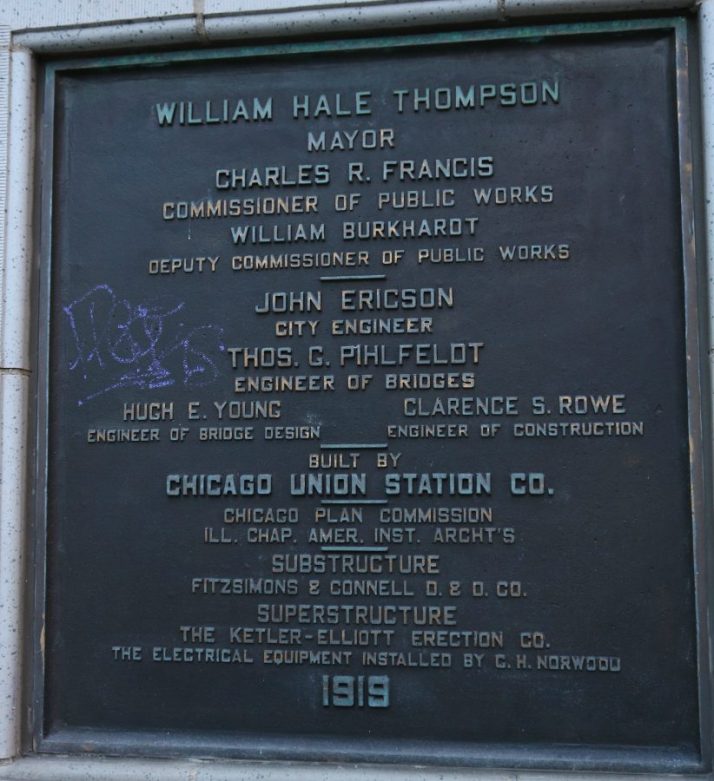 Sunrise was glinting off the building on the right, thousands of commuters hurrying to their towers for a day of work. 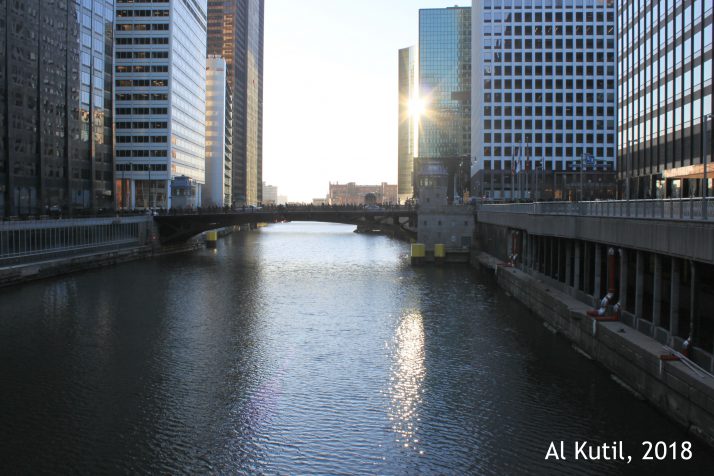 Much to our surprise, we saw a combination barge-tugboat Spartan, Spartan II from Ludington, Michigan traveling alongside us on the Chicago River. What a surprise! It was delivering a medium to keep dust to a minimum during construction projects. It turns out there are currently 47 new skyscrapers being built at this time!

We continued toward the Willis Tower, it looked majestic in the morning sun, had to stop and look a minute. 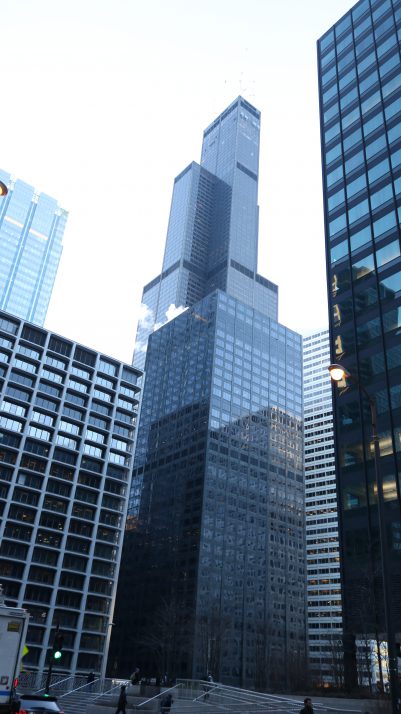 See those projections on the outside of the building facing east? These are the Ledge™ boxes on the  Skydeck on the 103rd floor. A closer view.

We saw two food trucks across the street from the tower. BBQ Boss and Beavers  Doughnuts. See all Chicago food trucks here.

It was now 8:13 AM. The entrance Skydeck Chicago opens the doors to get in line at 9:30, we went in to wait and rest a bit.  The entryway is designed to protect people from ice falling off the building. 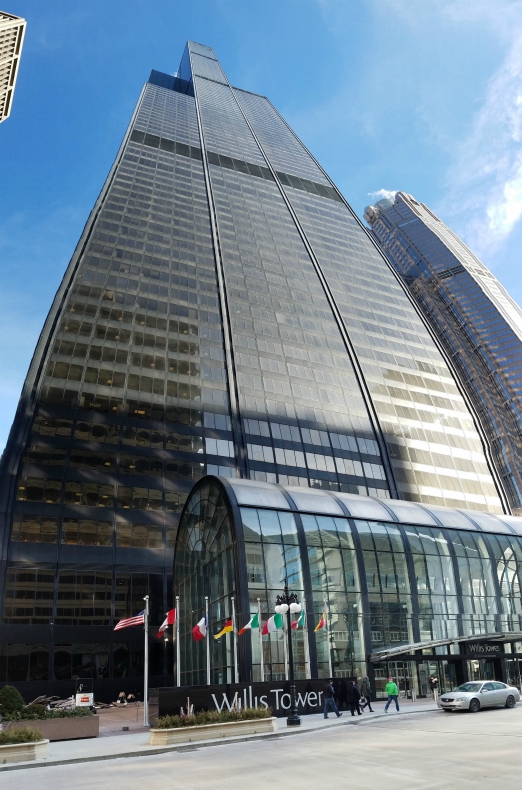 Photography is prohibited beyond the entrance (except the Skydeck) due to the many private businesses within the building. here is what little we could get. That’s Al on the left getting the businesses.

We waited from 8:30 to 9:30 on the lower level, several shops and small restaurants there. Sure we could have looked around town a bit in that hour but we didn’t want to get back late and then have a long like to contend with. We were right in front of the line. Promptly at 10:00 they opened. You have to put your belongings through a security scanner and walk through one first, then you can get your tickets.  We did that, then into the elevator line. We were on the first elevator up!  Since the express elevator was down for maintenance (knew that since watching Tripadvisor posts) we actually got out partway up and got into another elevator. We made it up to the Skydeck by  10:12 AM. We stayed up there until  12:30. Quite a few changes in the skyline since 2003 when we were last here. The Ledge™ was a lot of fun too! This was the picture they took with their camera installed in the ledge. You can get your pictures for $30 in the gift shop after you conclude your visit. A great memento for sure!

Another picture of the view looking northwest. It was a beautiful clear morning!

Video of our time there. You can also see it in the video on top of the page showing our entire day. Read the blog post just on the tower here.

We were out just after 12:30, three hours left of our day. We headed toward State Street. On the way, we came across the Flamingo sculpture. It has been in Federal Plaza since 1974. We also saw it from the tower. I am glad we saw this since it may be in danger of being removed.

We see The Berghoff restaurant on 17 West Adams St. Serving authentic German cuisine since 1898, it is a Chicago favorite!  Founder Herman Berghoff sold beer at the world’s fair in Chicago in 1893 and it led to the restaurant 5 years later.

We made it to State Street by 1:41 PM. We had not eaten yet and had little time so we stopped at Subway on State for a quick lunch. 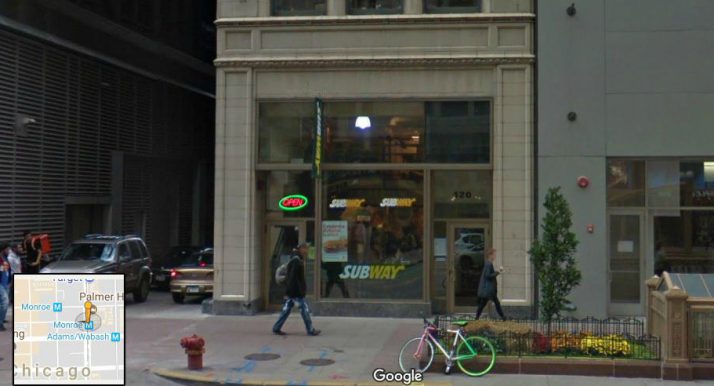 We ate in 1/2 hour, by 2:10 we were back out. I could hear music just up ahead. We headed north and found out the source. A group of street musicians called Chicago Traffic Jam Band was jamming at the street corner. What a bonus to capture some authentic Chicago sound! They can also be hired to play at your venue!

See and hear them for yourself!

We stayed about 5 minutes but had to keep moving.

We reach the famous Marshall Fields building, now Macy’s though to Chicagoans it will always be Marshall Fields.  At least the famous green corner clock is still there and the time is accurate. We didn’t have time to look inside, perhaps next time. I used to go to the soda fountain there when I was a kid, great memories! 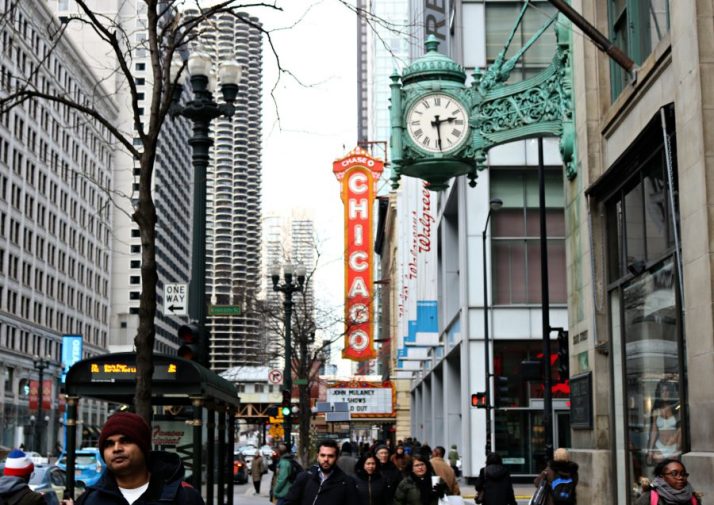 And of course, the Chicago Theatre. I went to a great show there in 1993 with my Dad called, Every Good Boy Deserves Favour by Tom Stoppard. Here is what a similar view looked like then, Dad is on the left. Thanks for taking me to the show! 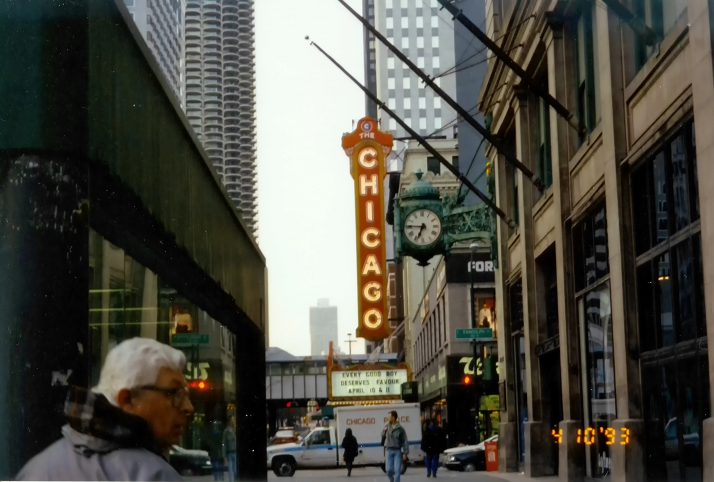 There were three plaques on the building, denoting it to be a landmark.

Across from the theatre is a Channel 7 webcam, here is the view it has. 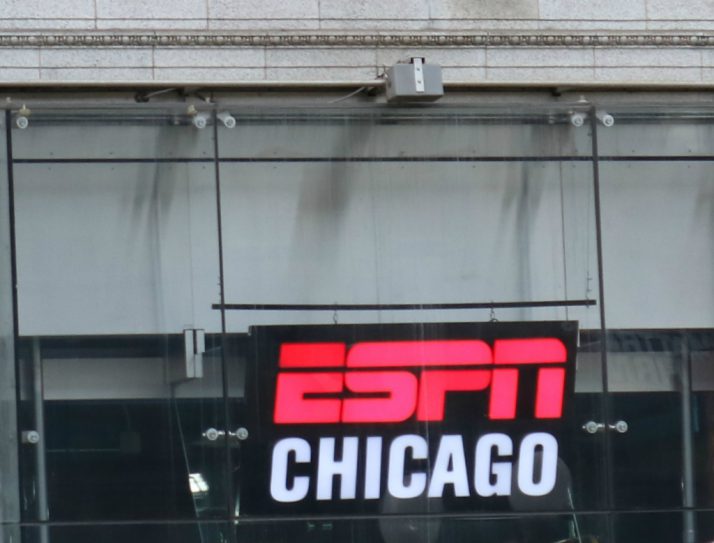 Near here on 24 West Randolph St. is the Oriental Theater. You could call this section of Chicago their Broadway. And you see Broadway shows here as well. 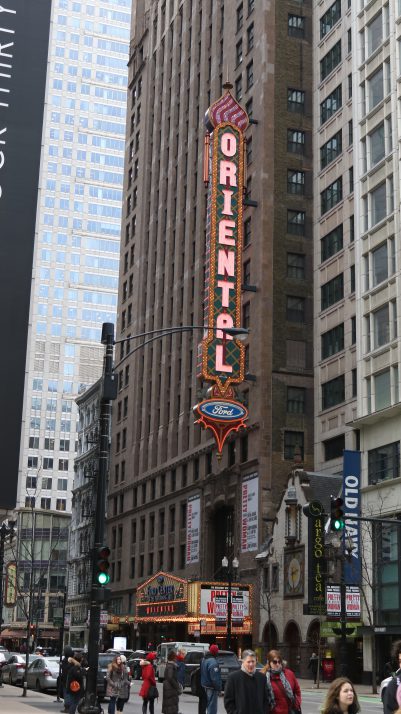 Just past the Chicago Theatre is the “L” train on a track elevated above street level. It is part of the CTA, or Chicago Transit Authority. Our train actually went under their track (see video). 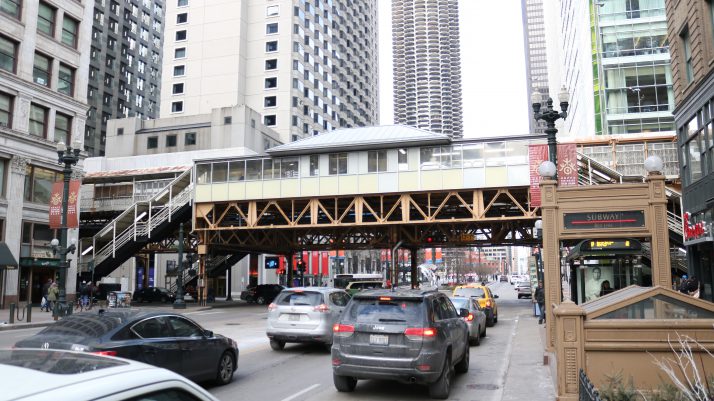 We got as far as Wabash and East Washington. The train went overhead there! This is the historic Jeweler’s Row District. Much fine bling to be had here!

It was getting late and we had to get back to our train! We turned east while on West Washington and went by one of the sites of the Blues Brothers movie film, the Richard J. Daley Center. 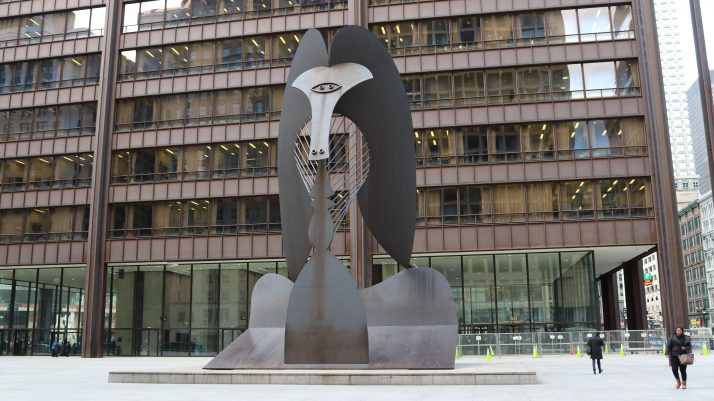 See the scene below.

We go under the tracks we soon will  be riding on.  You can enter the Ogilvie Transportation Center under here.

We are back! We got on the Union Pacific Northwest Metra back to Harvard with 15 minutes to spare!  We left at 3:45 PM sharp.  I got video with my phone pressed against the window to capture the views.

It was an enjoyable ride of almost two hours, passing through Woodstock. We crossed on the historic stone bridge as seen on the walking tour for the movie Groundhog Day. I was shooting video with my phone and caught the crossing on the way back. The first picture was taken last year.

Back in Harvard by 5:24. We had a wonderful day and hope to do it again!

To sum it all up, this was our walking route, courtesy of Google maps. 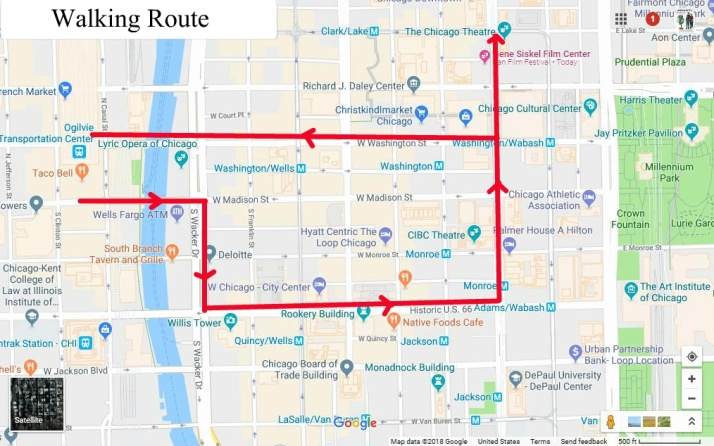 One thought on “8 Hours in Chicago”

This site uses Akismet to reduce spam. Learn how your comment data is processed.

Follow Adventures in Travel on WordPress.com
Join 165 other subscribers

Where I Have Been!

Create Your Own Visited States Map